ATC is proud to partner with Cendea to present the series, “Talent-Leadership-Culture (TLC)”. This blog series addresses the questions and gives insight to the art of finding the RIGHT tech leader to hire at the director level and above. Thank you to our experts for sharing their knowledge with the tech community.

As Wade Allen discussed in his blog last month, hiring the right executive leader is critical.  This month I’d like to have you think about what happens next, building the team.

In Jim Collins’ book Good to Great, he brought forth the idea of Level 5 Leadership among other thought-provoking precepts.  Level 5 Leadership is based on senior management acting with a measure of humility and doing what’s best for the enterprise as a whole, rather than what’s best for the individual leader.  Other tenets such as having the right people on the bus – and eventually in the right seats – caught our collective attention. Good to Great sold millions of copies and is still a staple of many personal libraries.  However, it was a snapshot in time – a brilliant one – but one whose examples can be challenged.  Some of the companies have faded from view. I think it speaks to the idea that we have to adapt to survive.  Building adaptable teams is essential! 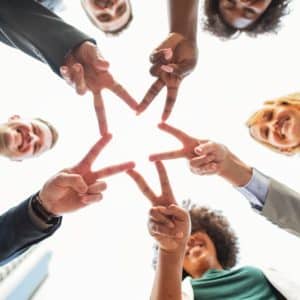 Photo by rawpixel.com from Pexels

Some of my favorite leadership examples came during my times at FedEx and Pulte Homes.  At FedEx, founder and visionary Fred Smith stated “when I’m looking for talent, I’m not looking for the best quarterback, I’m looking for the best athlete!”  I followed that notion and while I may not be in a Hall of Fame, I’d be on a few mythical all-star teams along the way. It taught me to be fearless in leaning in and using natural talents to lead divisions in areas I had no prior experience.  Our teams were relentless in serving our customers. We adopted mantras such as “if you’re not serving the customer, your job is to serve someone who is.”

The second great example came during my time working at Pulte Homes, one of the nation’s largest homebuilders.  Founder Bill Pulte asked me about my time at FedEx and I asked him about the earlier days at Pulte.  Bill was the poster child for “find a job you love and never work another day in your life”.  His passion was designing and building homes. He built his first house when he was a teenager.  It’s still standing in Detroit – now that’s sustainability!  With his passion on full display, Bill told me that when the company was about to be publicly traded, “I knew I had to hire people who knew what I didn’t, could do what I couldn’t and not feel threatened by them.”  He did exactly that, transitioning into the Chairman role while bringing on a more professional CEO. Based on my FedEx experience, I was recruited in as a versatile executive athlete (no, that’s not what my business card said!).  We built phenomenal teams and delivered exceptional results.

My daughter Lauren wanted to attend an Ivy League school.  We toured a number of campuses and attended orientation sessions at each.  I vividly remember one school’s admission/orientation ambassador with this admonition: “parents and students, I realize that you’ve probably labored under a long-standing notion that you have to be great at everything – a well-rounded student – to be admitted here.  Well this may come as a surprise but we’re actually looking for lopsided students to make a well-rounded student body”.  While Lauren was an outstanding student with a GPA I’d have to add my junior and senior years just to match, she probably wasn’t getting in there.  However, another thought hit me; I had built my teams over the years not too differently from how the admissions guide described their building the student body.  By the way, Lauren went on to a great four year education at Duke University!

However you synthesize the collective learnings from books like Good to Great along with experiences from great companies like FedEx. Pulte Homes, Dell and IBM, the most important thing is to harness the collective strength and talent of the individuals on the team!  You cannot afford to fill the room with people who only take up space. You need difference-makers. If you have great ideas but can’t lead, recruit someone who can take you to the next level (Impact Leader).  It’s not enough to get the plane airborne, you have to clear the trees at the end of the runway.  If you can’t do that, you’re better off never leaving the gate! With the right pilot and the right team onboard, you’ll reach new heights!