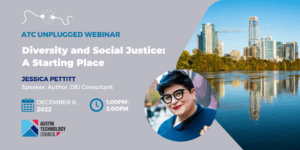 Join the Austin Technology Council for our final webinar of 2022, featuring Jessica Pettitt.

Unlike other online diversity trainings, this course introduces the concepts that the user or learner can utilize in their own lives immediately. Regardless of each participant’s identities and lived experiences, the concept of how we coexist, interact, and impact one another is imperative to build better teams, better connections, and deeper relationships.

Spend an hour reflecting on how you fit into the conversation of diversity. Coming to terms with our own unique positive and negative bias as well as how that intersects with our responsibility of perception and sense of entitlement to validation is the foundation of social justice work. Our experiences, choices, and impact, both intentional and unintentional, matter. This is the starting place.

1. Compensation in non-union jobs is outpacing compensation in union-represented jobs. A Bureau of Labor and Statistics report indicates the total wage and benefit costs for private-sector nonunionized employers was 3% higher than unionized employers for the 12-month period ending June 2022. Overall, total wage and benefit costs for private-industry firms increased 5.5%, but non-unionized companies accounted for most of the bump. In fact, pay for non-union workers rose 6%—the highest since the early 2000s—compared to 3.4% for union workers. The trend also goes beyond this 12-month period. Between the years 2018 and June 2022, non-union employee compensation has risen dramatically while union employee compensation has remained steady.

2. The average length of negotiations for a first collective bargaining agreement increased to 465 days. A Bloomberg Law report found the time it takes an employer to negotiate a first contract with a union has increased from an average of 409 days in 2019 to 465 days today. The COVID-19 pandemic may partially account for the prolonged timeframe, having created additional issues to address during bargaining, including personal protective equipment, mask and vaccination requirements, and other health and safety policies. Under National Labor Relations Board (the Board) law, unions have a “certification year” to negotiate a first collective bargaining agreement before employees can file a decertification petition to oust the union. The new 465-day average may result in more unionized employees trying to decertify their unions if they are dissatisfied with the progress of negotiations.

3. Employees at Trader Joe’s and Chipotle locations voted to unionize, continuing the string of unionization at national chains. On August 12, employees at a Trader Joe’s in Minneapolis, Minnesota voted to unionize by a vote of 55-5, making them the second of the grocery store’s more than 530 locations to organize with the unaffiliated labor organization Trader Joe’s United. Similarly, on August 25, employees at a Chipotle Mexican Grill in Lansing, Michigan voted 11-3 to be represented by the International Brotherhood of Teamsters (IBT or Teamsters), becoming the fast casual chain’s first location of its nearly 3,000 to do so. The successful organizing drives continue the trend of first-time union victories at companies with a national presence, joining the likes of Starbucks and Amazon, who both saw their first locations unionize in 2021. Similar to the employees at Trader Joe’s, Amazon workers voted to join an unaffiliated labor group, the Amazon Labor Union (ALU). The union efforts are generally led by Gen-Z and Millennial workers and suggest chains at both companies may be poised to take on expanded union campaigns nationwide.

4. The U.S. Court of Appeals for the Ninth Circuit ordered a newspaper to reimburse the Teamsters union for bargaining legal fees after misconduct. NLRB v. Ampersand Publishing, 9th Cir., No. 21-71060, (9th Cir., Aug. 11, 2022). The Court enforced a Board order requiring the Santa Barbara News-Press to reimburse a Teamster’s affiliate’s $42,000 in legal fees for expenses the union incurred during collective bargaining negotiations. In 2015, the Board found Ampersand Publishing LLC, which runs the newspaper, engaged in bad faith bargaining and unfair labor practices, namely, making unilateral changes to employment terms and transferring bargaining unit work without notice to the union. As a remedy, the Board ordered the newspaper to pay the union’s bargaining expenses. The Ninth Circuit enforced the Board’s order, finding the newspaper’s conduct constituted aggravated misconduct, thus justifying the extraordinary remedy. Although the Board cannot order employers to pay legal fees incurred during litigation, the Court explained that reimbursement of expenses incurred during bargaining “falls squarely within the heartland of the [Board]’s delegated powers.” The Court also noted that despite pending litigation, the negotiations were “independent from the [Board] adjudications.” The decision comes on the heels of the Board’s latest wave of incorporating consequential damages in settlement agreements for alleged labor law violations. These consequential damages have ranged from interest payments for loans to the cost of baby formula.

5. The U.S. Court of Appeals for the Fifth Circuit held that Department of Labor Advisory Opinions are subject to judicial review. Data Mktg. P’ship v. United States Dep’t of Labor, No. 20-11179 (5th Cir., Aug. 17, 2022). The Court held that Department of Labor (DOL) advisory opinions answering employers’ legal questions are final agency actions subject to judicial review. The advisory opinion in question found an insurance plan was not governed by ERISA. The Court held this was both a “final agency action” subject to review and added the opinion was unenforceable because it was arbitrary and capricious. The DOL regularly issues advisory opinions based on hypothetical facts that employers use for guidance. Prior to the Court’s decision, these advisory opinions were not considered to have the same finality as formal regulations to warrant judicial review. Because DOL advisory opinions are generally considered precedential, the decision provides an avenue for companies to sue the DOL in order to set aside unfavorable guidance, calling into question future reliance on such opinions. The ruling may also impact other executive agencies that issue similar opinions, such as opinions issued by the Board’s Division of Advice.

Please contact a Jackson Lewis attorney if you have any questions about these developments.

State of Finance Survey – How SaaS Leaders are Planning for 2023

Element Finance invites you to take our short survey. Our goal is to gather feedback on how savvy SaaS leaders are planning for 2023 in the areas of:

• Identifying the metrics that matter most

Please take five minutes and tell us about your business and how you’re preparing to prosper in 2023.

Participants will get exclusive first access to the results and findings of the survey and a complimentary consultation with an Element Finance analyst.