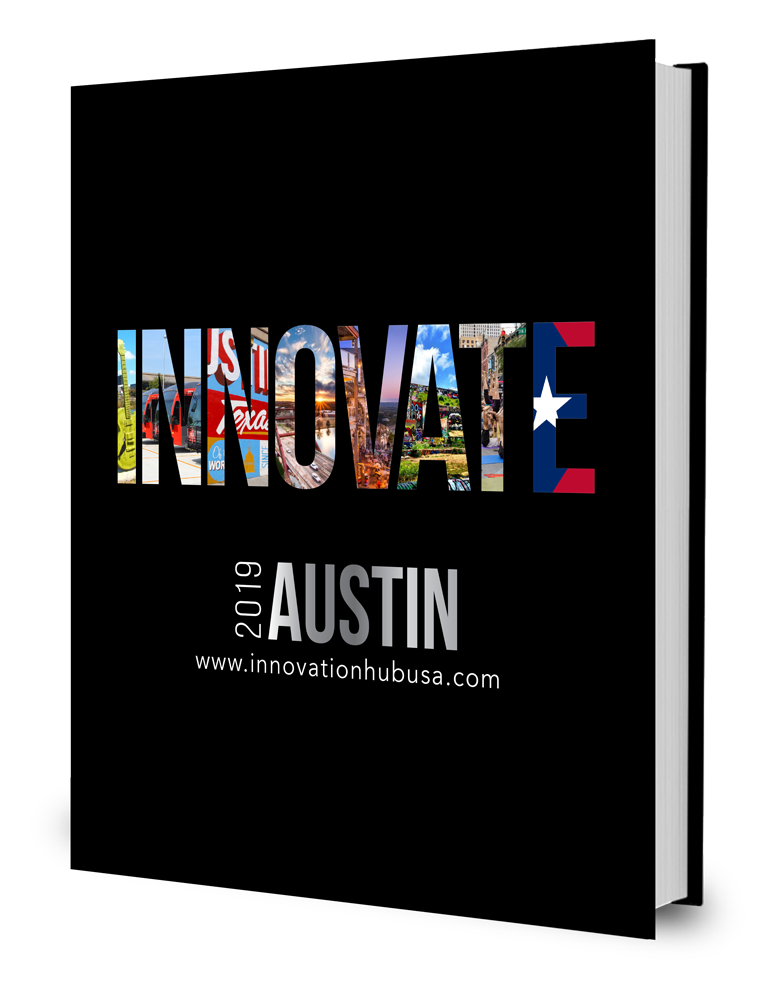 INNOVATE AUSTIN—snapshot of the innovation ecosystem in Austin

AUSTIN, TX—INNOVATE AUSTIN is the latest edition in the prestigious book series from Global Village Publishing in partnership with the Austin Technology Council. It is a 300-page premium coffee-table book complete with augmented reality videos—showcasing all the people, companies, products, and services that are leading the race within Austin’s innovation and entrepreneurial ecosystem. Innovate Austin is also available as an e-book and online channels, representing a network with a common goal of ensuring Austin’s best innovators and innovation enablers connect and succeed around the world.

“We’re immensely proud to share the stories of so many amazing people and companies currently thriving in Austin,” says Sven Boermeester, founder of the Innovate publishing series. “Innovate Austin is an authentic snapshot of the city’s innovation ecosystem, and it’s clear from participants’ stories why Austin has been named as one of the leading tech hubs in the US.”

Austin, with its exciting innovation ecosystem, is the 10th city to join the international INNOVATE family. Austin has established itself as one of America’s top cities for tech, and Innovate Austin captures the people and companies that have made it possible.

Within the book’s industry-specific chapters, innovators and innovation enablers from all over Austin tell the stories of their organizations. Most features are AR-video enabled, allowing participants’ stories to come alive on the screen of any smartphone through the Global Village App, inviting readers to learn more about those on the front lines of making Austin a world-class tech hub.

Those featured in Innovate Austin were invited to participate after careful research into their contributions to the city’s ecosystem. By rejecting a “pay to play” model, Innovate Austin can celebrate those companies and individuals that are actively working at building a better tomorrow for all, no matter their industry or size.

“Austin offers us a glimpse into the future. One where we can change lives for the better through collaboration and a support network that is genuinely committed to helping the city thrive. Austin’s Innovation Ecosystem is proof that we can create amazing things when we work together and support each other.”—Sven Boermeester, Global Village’s founder and CEO.

Boermeester is an avid traveler and conceived of creating the coffee-table books as “love letters” of different cities he traveled to. Boermeester opened his first media company upon completing his business studies in Cape Town and since then has published over 183 INNOVATE and BEST OF editions across 60 countries. Innovate Austin is part of Global Village Publishing’s growing number of titles.

Carel “Callie” Van Graan, Global Village Publishing’s COO, possesses a similar wanderlust and love for books. As a serial entrepreneur with deep experience in marketing, branding, and logistics—and having traveled the world with his family—Van Graan was well-suited to bringing the INNOVATE series into being.” Global Village’s books always reward a closer look into the cities they feature,” Van Graan says. “InnovateAustin is no exception.”

Innovate Austin will be available for purchase through InnovationsoftheWorld.com and Amazon from November 2019. The book was showcased for the first time to the public at the Austin Technology Council’s CEO Summit in October and received with great enthusiasm.

All participating companies and friends are invited to the book launch party at Native Hostels in Austin on Wednesday, December 4, starting at 5:30 PM.

Global Village Publishing produces high-end, tech-enabled coffee-table books that feature cities around the world. Its series include INNOVATE—which celebrates the leading innovators and innovation enablers of a city—and the BEST OF series. Each book is a portrait of the people, places, and businesses of different global locales. By teaming up with publishing partners on the ground in the cities featured, and by ditching the pay-to-play publication model, Global Village Publishing captures the ecosystem of a place and sees the world as an ever-growing tribe of entrepreneurs, colleagues, and friends.
« Previous
Next »