Election Update: What Investors Can Expect for 2020 and Beyond 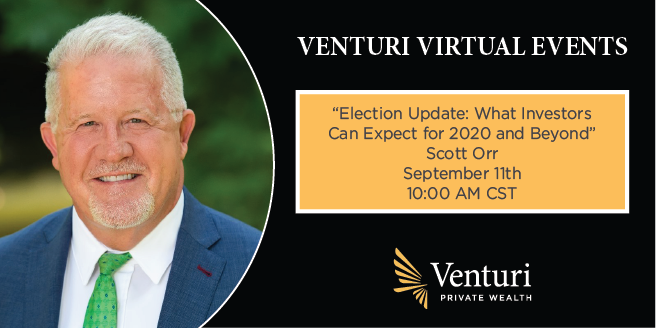 What can investors expect from Washington for the remainder of 2020 and beyond? With a pivotal general election coming in November, come hear an analysis of the current political climate in Washington, key congressional races to watch and the expectations for future control of Congress and the White House. Gain an understanding of recent and proposed regulatory and legislative activity and how that impacts investors and the financial markets.

This virtual event will be hosted by Venturi Private Wealth, with guest host, Scott Orr.

Scott is Vice President of Government Relations and Public Affairs for Fidelity Investments, serving in this role for more than eight years. He is a member of the Texas executive leadership team and is responsible for all of Fidelity’s regional governmental relationships at the local, state and federal levels, working closely with Fidelity’s Washington-based team. He also oversees Fidelity’s civic and community relations efforts, including volunteerism for its 6,000 Texas-based employees and working with its strategic nonprofit partners and other philanthropic efforts. He speaks frequently to client groups and financial professionals regarding the regulatory and political climate in Washington and its implications for investors. In Scott’s original career with Fidelity Investments, he worked for 12 years as portfolio manager and money market group leader in the fixed income department of Fidelity Management & Research, managing over $11 billion in mutual funds. He currently is Public Policy Chair for the Dallas Regional Chamber and a board member of more than a dozen national and regional civic, trade and nonprofit organizations. Between his time at Fidelity as portfolio manager and his current role, Scott spent a decade serving as the CEO of two nonprofit organizations and seven years as an elected public school board trustee. Scott is a Chartered Financial Analyst and earned a BBA degree in accounting from Abilene Christian University and an MBA from Harvard Business School.